Anyone who has ever had the luck of sharing a time of their life with a dog will be able to tell you how their personality is, which food they like and which they don’t and how they behave when faced with different kinds of situations – basically, they have feelings just like we do, but we just happen to speak a different kind of language.

It was when I was living in Medellín, Colombia, at the end of 2018, that I knew I was ready to rescue a dog, and that’s when I met the dog that I would call Asia. One day in October I heard that a box full of black puppies had been found in Bello, a town confining Medellín, and I could go see them. Without a minute of hesitation, I hopped into a taxi with Emma, my best friend and housemate, to go see the dogs.  We only found out later that, in the town where we went to pick Asia up, there happens an average of 1.5 people get murdered every week. That’s when I knew this dog was bound to have a strong character.

Asia was probably only about three weeks old then, and she could easily fit in my tote bag. Because of this, for the first weeks, she never left my side, and I would sneak her into stores and restaurants and supermarkets (also, by the way, a supermarket where you can buy a glass of wine that you sip on while you go grocery shopping – Colombia is great).

At the same time, Emma adopted a beautiful rescued cat named Prince, and seeing the two of them grow up together was the first time I realized how speciesism is only a human problem.

Colombia treated us well, with its lush nature, breathtaking views, and its reggaeton soundtracks, but we were wondering souls; and so after a while, it was time for Asia’s first of many journeys to start. For Asia to travel from Colombia, we had to go through an incredible bureaucracy including having a sample of her blood taken and sent to the United States for a designated vet to confirm that she indeed had antibodies for rabies and was fit to enter the destination country.

We arrived in Panama after a smooth flight, on which Asia was already big enough for her to have to travel in the cargo, but she handled it very well: when we arrived in our accommodation in Panama City, I left the cage she had traveled within in a corner of the house and there I found her sleeping later: I knew that a little traveler was born that day.

Panama was the land of freedom for us: without a fixed accommodation, the only constant for Asia and me were our travel buddies, Emma and Prince. At one point we rented a house for a month close to Las Tablas, and it was right on the beach: we would spend the days running on the sand and cooling down in the waves, and more memories were made.

It was in July 2019 that Asia went to her first Pride parade, through the stunning historical barrio of Casco Antiguo: she was wearing a rainbow bandana around her neck, being the cutest ally.

After some months in Panama, circumstances were bringing me back to Europe, and I started preparing Asia for this new adventure, the biggest one yet.

Our journey to Paris, accompanied by Emma and Prince, went smoothly. The same day we landed we visited a veterinarian to get Asia and Prince’s passports, so they could officially begin their European life. This was the summer of traveling for us: we visited a Parisian vegan cheese store, we took a train to Switzerland, we swam and rode boats in Italian lakes, we took a road trip through Tuscany and to the tiny country of San Marino  – admittedly, this last one was solely inspired by the desire for me and Emma to visit together one more country (this will forever be in our to do list until we run out of countries), but it turned out to be an extremely beautiful place.

After our adventurous European summer, it was time for Emma and Prince to continue on their own path, while Asia and I moved to the city we currently call home, Barcelona. The journey was an adventure of its own: we decided to take the train from Milan to Barcelona, but unfortunately, that summer Italy had been struck by unstoppable bad weather and while we were already on the train, we were told that some parts of the tracks ahead had been covered by rocks which had collapsed from the nearby mountains and we shall continue the journey to Marseille on a bus. 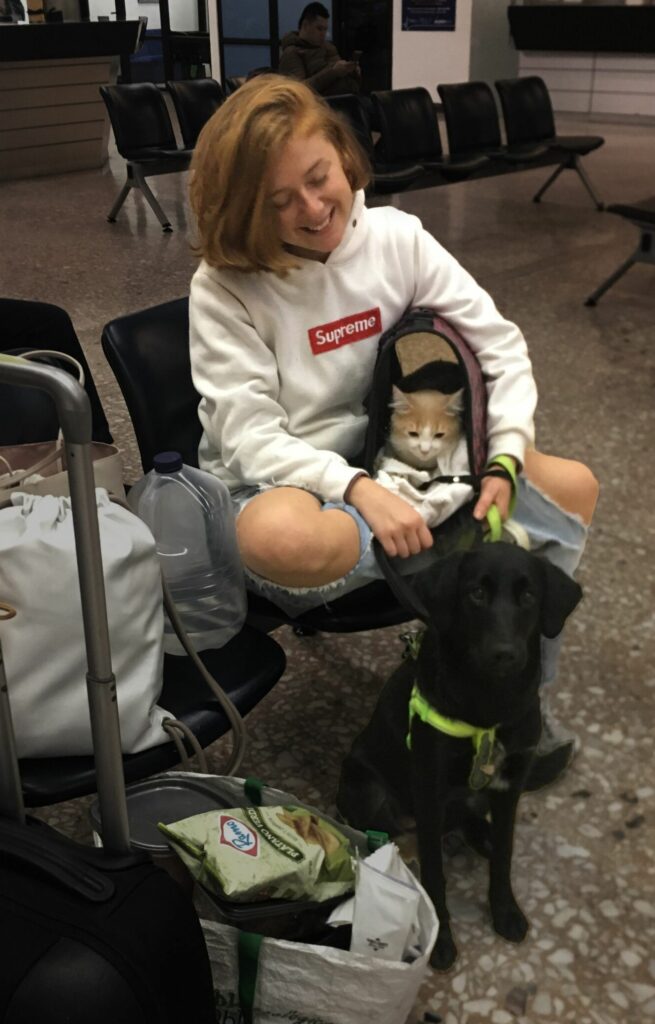 The train was supposed to arrive in Marseille at 10 pm, but instead, we arrived there at 3 am by bus; the neighborhood did not feel the safest, and I was so glad to have Asia with me, even if the walk to the hotel where I had booked a night for us was not long. After a very short night’s sleep, we were up again to catch the next train to Barcelona. We arrived here on the 16th of October 2019, a day in which protests sprouted all around the city, and cars were put to flames, making it a particularly memorable day in which to move to a new country.

It was in Barcelona that a dog was just waiting for me and, especially, for a big sister like Asia. Soon after arriving in Spain I wanted to get Asia a companion and I decided to foster a dog, and that’s when Portia came into our life. She was found with her siblings in a field outside the city, and her rescuers had named her Hanna. I thought such a standard name could not fit such a stunning puppy, so I named her after Shakespeare’s quick-witted and beautiful heroine in “The Merchant of Venice”.

When I first saw her in the veterinarian’s office, she was so scared that she was shaking and she couldn’t lift her gaze from the floor: it would take her days to finally look into my eyes, but for me, it was love at first sight. Although for the first weeks Asia wasn’t happy that her personal space had to be shared with the new arrival, she quickly learned to appreciate the company, and it was then that I adopted my second dog.

Shortly after that, the pandemic hit, and I couldn’t have been happier to have these two exceptional companions for quarantine: not only for the fact that I was never alone but also because, thanks to them, I could walk out of the house three times a day – something not everyone was able to do.

After the first long quarantine period, we also changed houses and moved very close to Montjuic park, and we were finally able to go for long off-the-leash walks again.

When you watch two dogs play in nature, the fact that they are having a great time is unmistakable: following a ball, running around, and going after each other. If you have seen videos of the lucky cows who live in freedom in sanctuaries, you can see the same fun, energy and playfulness. So why are the former animals covered by laws which protect them, while killing the latter is not only legal, but one of the biggest businesses in the world we live in? Once you see the soul of an animal, how is it possible to deny that they all have souls?

Speciesism is a concept that is necessary for cruel businesses to keep on profiting from animal abuse, and it’s particularly dangerous because it’s so ingrained in any culture. Wherever you are from, it’s highly likely that you have been taught that some animals are to be loved and others are to be eaten. Could you look into the eyes of a pig and explain why their life is not worth saving? But would you save a cat if you saw a person abusing them?

Adopting two dogs and spending my life with them has definitely made my connection with animals grow stronger. I see their eyes when I look into a cow’s eyes, I see their sweetness when I see a rat sleeping, I see their happiness when I see a pig’s belly being rubbed. Undeniably, they are all individuals and deserve to be let live.

It’s time to challenge traditions, because if there is something that never changes, that is change itself, and now is the moment to overcome our inertia and start using our brains and hearts to do what is right, and not simply do what has always been done.

While researching for images for this article we came across this lovely short movie about a dairy farm turned into a cows sanctuary, you might want to have a look at it on the side.

Footage of animals living free lives are from Animal Protection UK and We Animals Media, you may want to check those channels too. 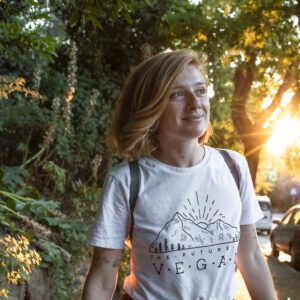 A big fan of eating well and enjoying every bite, Valentina develops her cook skills with amazing vegan dishes while also participating in protests to bring awareness to the animal cause. A nomand soul, Valentina was born in Italy and currently lives in Barcelona.